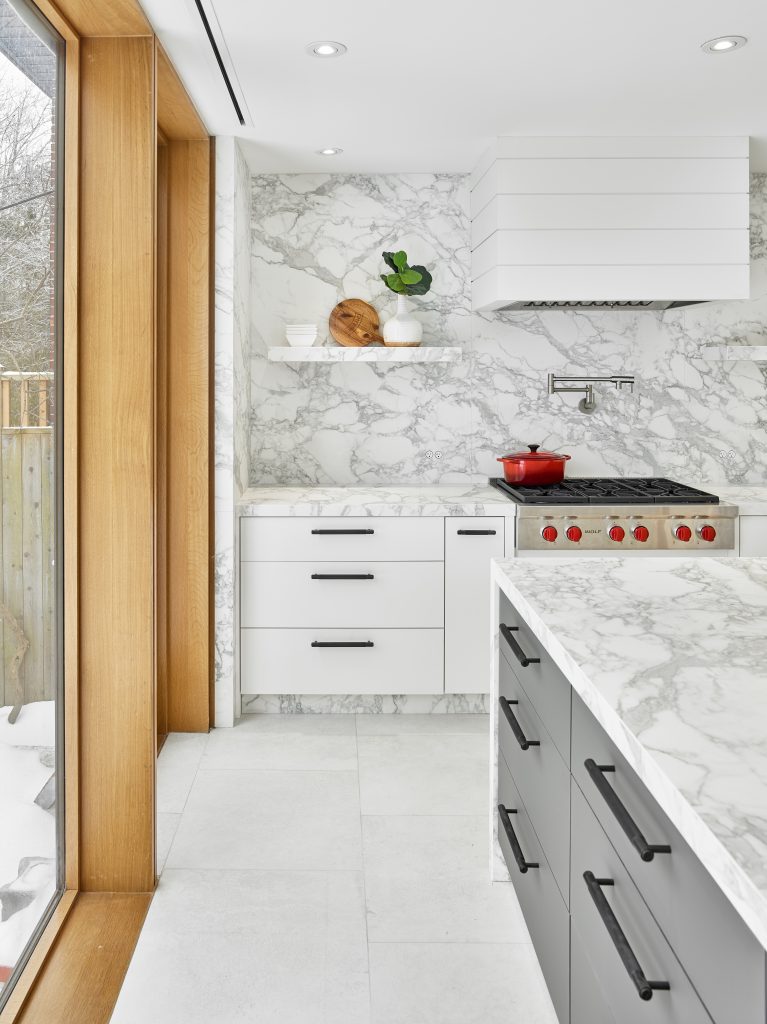 We completely opened up the back of this Forest Hill home, creating a direct, unobstructed view to the trail, from the moment you step inside. An enormous wall of floor-to-ceiling windows floods the entire hallway with light, beckoning visitors to the kitchen and blurring the line between inside and out, year-round.

The resulting large, open-concept space creates a sense of continuity between the kitchen, living room and outside, allowing the natural light and tones of the surrounding greenery to dominate, bringing warmth to the clean, neutral palette of the finishings.

To maximize the view of the outdoors, every detail was considered with the wall of windows. They slip behind white oak structural columns to grasp an extra few inches of light and view, and wrap around a corner to create the illusion of being endless. Each pane is completely flush with the floor and ceiling, while a 14’ long centre window – which needed to be craned over the house – creates the cleanest possible view of the outdoors. In winter, the windows are surrounded by white and become a focal point, while in the warmer months, the white oak frames disappear in the deck and trees beyond, allowing the visitor to be totally immersed in nature. 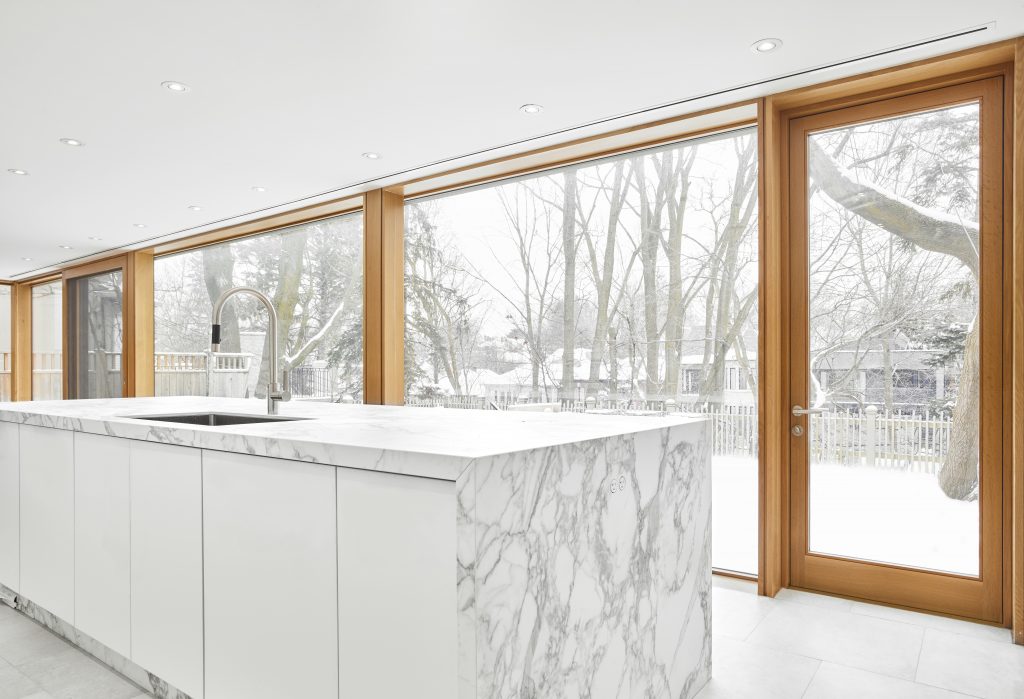 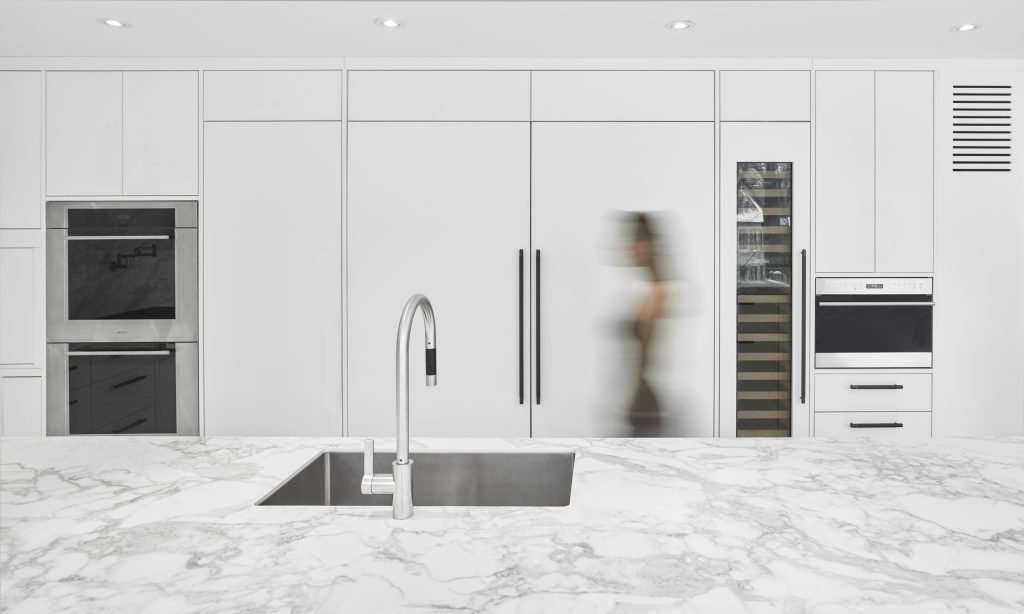 This home boasts a stunning, aspirational kitchen, immersed in the lush greenery surrounding the home through a show-stopping, floor-to-ceiling wall of windows.

House 261 is owned by a passionate home chef, who loves to create beautiful meals for her family. For years, she worked in a dark, closed-in kitchen with small windows which did not take advantage of the spectacular view of the lush trees and foliage of the adjacent Beltline Trail. Our mandate was to create a well-deserved dream kitchen for the client and connect the home to the beautiful landscape beyond. 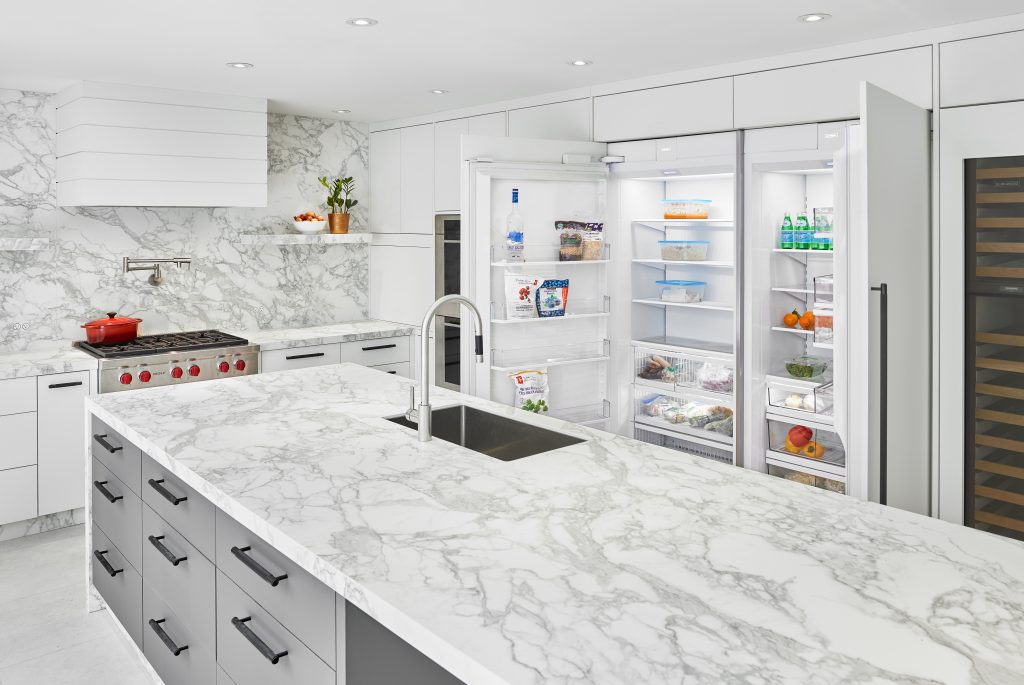 Thoughtful attention to every detail is carried throughout the space, with a major focus on the quality and durability of materials and appliances in the kitchen. Every element maximizes form and function. The porcelain slab baseboards, integrated electrical outlets and linear diffusers appear deceptively simple, while the matte white laminate custom cabinetry is completely flush, and fingerprint-proof, scratch resistant and anti-bacterial. The 12’ island with waterfall porcelain slabs in the centre of the space features storage on both sides, and a seating area for guests to linger while the chef works. In-floor heating ensures warmth and comfort when spending many hours in the space. The aura of calm neutrality is punctured by an unexpected burst of colour and pattern when the walk-in pantry is opened, revealing it’s playfully lined in a bold leopard print wallpaper.